My last lesson before really delving into the curriculum was about patterns and predictions. I tweeted about this a few times looking for ideas. I really just wanted something that the students could explore and make some meaning of while building the habit of always looking for patterns, relationships, and connections.

I started the first class by giving them my handout with an unfinished Pascal's triangle and asking them to write down as many patterns as they could find. 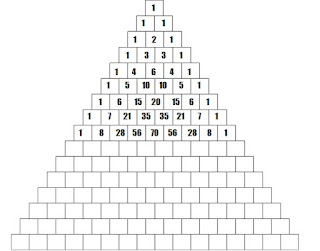 This went over like a lead balloon. First, they just couldn't resist filling in the boxes, ignoring my directions completely. Then when they finally did get around to writing any patterns, they didn't know how to put them into words. This was what I wanted the whole point of this lesson to be but I didn't set them up for success at all. I realized later that I could have patterns written out in various colors and then they would have to find the pattern in the triangle and color in that same color. I should have done some kind of modeling rather than just throwing it out there. But in the middle of the lesson, you just have to push forward.

The next hour I set it up differently. I didn't give them the handout. I showed them the picture on the SMART board and asked them to tell me anything they noticed/wondered (Thanks Max!). Hands were going up like crazy. I called on everyone and just said thank you after whatever their response was. Then I passed out the handout and asked them to write down three of the patterns we just said out all. This went over much better. Then I gave them free reign to start filling in the rest of the pattern. You have never seen students so engaged! I truly believe it is basic human nature to want to solve puzzles. Then we started to color odd numbers one color and even numbers another color, in order to bring out Sierpinski's triangle. Unfortunately, we ran out of time.

The second part of the lesson was thanks to @aanthonya. Apparently, bees reproduce according to the Fibonacci sequence! Math is everywhere. Check out the notebook presentation and pdf handout.

I will end the lesson by reinforcing the previous concepts we learned- summarizing. I'm asking students to write a metaphor- how is finding patterns like going on a treasure hunt? Finally, I asked students to name the three patterns discussed in this lesson- Pascal's Triangle, Sierpinski's Triangle, and the Fibonacci Sequence.

We'll finish up the lesson on Monday- excited to hear their answers!

P.S. One student noticed a pattern I hadn't seen before. The sum of each row equals 2^n-1.  Hooray!