I've always taught special right triangle by comparing similar triangles, writing proportions, and cross-multiplying. Last year I tried this investigation for the first time that also doubled as a project with mixed results. I tried it again this year but without the project piece. And I'll be honest, this year I walked around giving some hints and last year I didn't help at all. Why? Because I felt like my class was so needy and had to start learning to be more independent. This year I didn't let them talk until they had finished the whole page front and back. Then I asked them to compare with at least two other people. That part went really well.

Then we went on to basic INB notes. Some students really took the lead in shouting out what to do. While it wasn't cross-multiplying, they were using patterns and it seemed to work.


A student asked this question on Friday and I told him I would find out and explain Tuesday.

Which led me to this:

I used these from @MrsNewellsMath last year and my kids grasped it! https://t.co/thop7WWrmR
— Breanna Davis (@MissDavisSCSD) September 3, 2018


I really loved her materials but I had already 'investigated' the patterns and already had INB notes. What to do....

Strips to the rescue!

We made a Math Tools pocket at the beginning of the year and added calculator strips. I turned her charts into strips and we used them to practice with dry erase markers and then write in the answers.


I color coded the 'levels' that Katrina mentioned in her post. 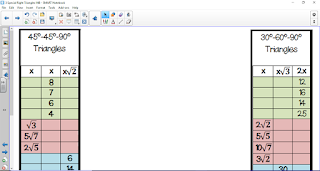 Using the tic-tac-toe method, we decided first which column the given information goes in and then how to solve for x. This really helped them see when we need to multiply and when to divide. Once we had x then we could fill in the other two columns.

Two students figured out shortcuts to the patterns without doing the work. I explained to them that that was my goal but when I led with that in the past, everyone would get confused and so I need to teach a structure that EVERYONE can fall back on.

I felt like this really cleared things up from where we left it on Friday. Next time I teach it I will do the strips right after the investigation and then they can use the strips as a reference for the INB notes.