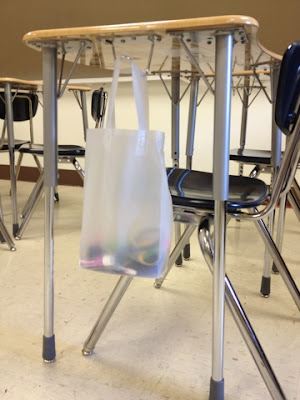 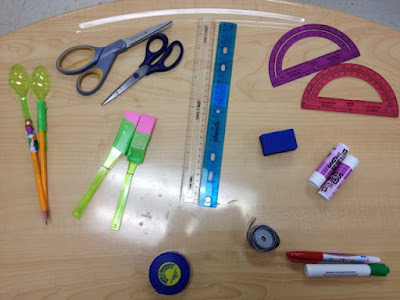 I have achieved one of my summer goals. I finally, finally created the template for my math portfolio. Only because it was my final project for my writing across the curriculum class, but still, it's done.

The portfolio is built around my Algebra II class but I don't have the concept list or my priorities nailed down yet so the concepts the students will be writing about will change. I think that's what I need the most help on. I want students to write about big concepts, essential questions, the overall themes throughout the course.

I'm feeling pretty optimistic about it but I'm ready to see what you guys think. Is this doable? Will this project increase student achievement in any way? Did I use writing in a way that will increase learning? Did I leave out any important ideas? What should be changed or removed? How could I do this better?

I wish I could show a picture of every page (I could, but won't) because I am ridiculously proud of it, but it's 25 pages long.

Without further ado, my math portfolio!
Created by miss.calcul8 on Monday, May 21, 2012 9 Reflections

misscalcul8: When kids go to sleep or just do nothing in class, do you write them up or ignore them or...how do you deal with it?

@CrysHouse: @misscalcul8 I don't tolerate sleeping. If I can't nap, neither can you.

@CrysHouse: @misscalcul8 I usually warn once. Then I make them stand for the remainder of the period without leaning on furniture.

@CrysHouse: @misscalcul8 Generally, that's effective. If they continue to work, I don't make them keep standing. They have to "earn" their seat back.

@shanr55: @misscalcul8 get them involved. Give them a task, important and purposeful.

@Vvelasquez2: @misscalcul8 Depends on the students. I give leeway to special students, but still stay on them. Some students I try to regroup them.

@JamiDanielle: @misscalcul8 Wake them 100x til they get annoyed enough to swear at me, then write them up. Lol. #truthtelling

There's one week of school left so I give up on making them stay awake but I need a better plan to avoid this next year.

I'm sure I'm not the only one who struggles with this so I thought would share my responses from Twitter.

Any other ideas besides being more awesome?

I needed a project to do with my geometry class while my juniors were gone for ACT test prep.
Mimi sent me the logo project almost a year ago to the date. I looked through it and decided to adapt it for my own. Here's my version. I printed out the paper needed for each day and put them inside a manila folder. It was a great way to keep everything in order.
First we spent a class period talking about logos and slogans and what made them memorable. Then we played The Slogo game (worksheet). I made up a game with slogans and logos where students had to guess the company. They absolutely loved this game. I ended class by explaining that we were starting a project where they would be designing their own logo. Some were excited and some were groaning. And that was day one.
Day two I gave them a sample logo to practice labeling and measuring (page 1) to start with. Then they started to create their own, careful to use only straight lines or circles.
Day three we spent practicing some percent problems (page) and they set off to label and measure every segment and circle in their logos into a t-chart.
Day 4-5 we took a 5 x 7 plastic printing plate and placed it over their logo. Students had to choose whether they needed to shrink or enlarge their logo to better fit the plate. They randomly pulled a percent out of two cups that I had ready to go. They took that percent and their original measurements and calculated the new measurements for their shrinking or enlarged logo.
Day 6 we used the new measurements and a ruler or compass to draw the new logo. Once the drawing was complete, we traced the logo onto the plastic printing plate with a skinny sharpie and carved the tracing with a carving tool. (FYI: If your logo has letters on it then you have to flip it over and carve the letters backwards so that they will print in the right direction.)
Day 7 we made a field trip to the art room. Students picked out the (water soluble) ink they wanted and painted it over the indention of their carvings. 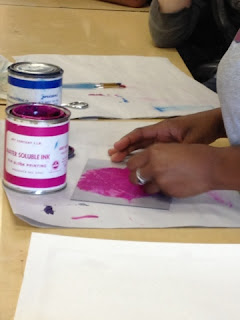 Then they wiped off the excess paint. Next they blotted the pre-soaked printing paper with a brayer. 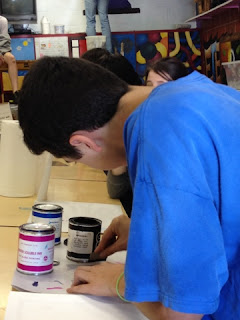 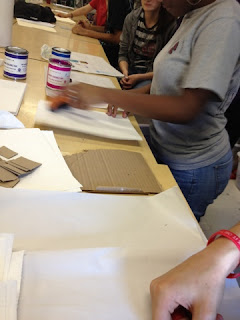 Finally the paper and printing plate went on the printing press (paint side up!).  They wheeled it through the press and back and voila! 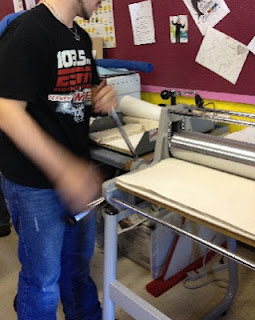 Their logos now appeared in ink. 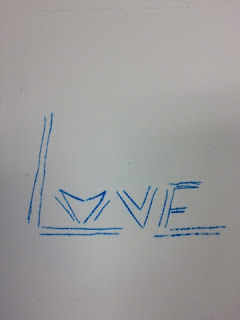 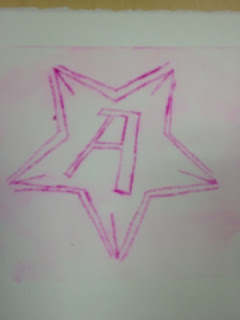 Day 8 we talked about logos representing a product or a company. I asked them to create a company name and a product to sell. Then, I told the class that Bill Gates had a $10,000 grant for a company created by a high school student. I had to burst their bubble when they asked me "Wait, is this real?" Apparently I was quite convincing.
Their task was to write a letter convincing him why their product was the best and they deserved the money. We did a mini-lesson on descriptive and persuasive words. I had a student writing them on the SMART board as we listed them. Next, they wrote their three reasons and conclusion in the graphic organizer, making sure to use descriptive words. After that, I modeled two letters (notebook file) that I had written. I had them rate both letters and compare what they had in common and then what made them different. Students were great at identifying what made the second letter better. Finally, students started writing their letters, using the graphic organizer as the skeleton.

You could hear a pin drop. I could not believe how engaged the students were and how much they were writing. When I ask them to write explanations or a summary or respond in their feedback journals, it's all I can do to get two or poorly written sentences. Even better, as soon as they were finished they were rushing around the room to share their letters with others and find out what everyone had written. They asked me if they could type their letters and they were off to the computers.

At the end, some wanted to cut out their letters with fun shapes and cover their folders in glitter. I felt like they were really proud of their work.
This project turned out really well. I'm proud of myself because the project was multi-genre, cross-curriculum, and involved writing. I know it seems like I am on a roll with these projects but this the first year I've ever really done any projects and it's thanks to people like you who have sent me resources, encouraged me, critiqued me, and allowed me to observe and learn from you.
Thank you.
P.S.The end of the packet has a bunch of percent problems that I intended to use but never got around to. Oh well, maybe next time.
Created by miss.calcul8 on Thursday, May 10, 2012 2 Reflections