Illinois changed the law so that the first day of school had to last 5 hours. Normally it was two. This year we broke students into groups and they rotated throughout the school to 'learn' the expected behaviors for that part of the school. They scheduled 20 minutes for each group when it was easily done in 5-10 max. After that, students went to every class but only for 8 minutes a piece. Then they went to lunch and went home.

It seemed obvious to us that this should have been switched so that students were in class for 20 minutes. And of course we didn't even know the schedule until the end of the day before. Thank you admin.

I wanted to create something short and sweet, more for the mere fact that I wanted them to get used to coming in, immediately getting a paper, sitting down, and getting started. I happened to stumble upon @KristinABC123's #made4math post about a Class Brochure. I loved it and that's totally the kind of thing I enjoy making. But I only had 8 minutes to talk about everything on this page. I knew I wanted it to be fun looking and simple with what I thought the most important information was.

Here's what I ended up with: 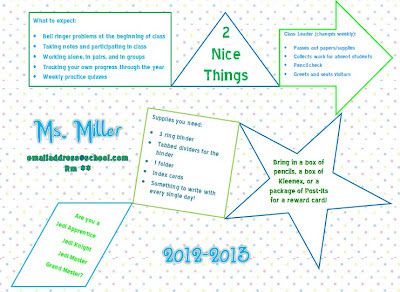 In honor of #TMC12, this slide was on the screen when they walked in: 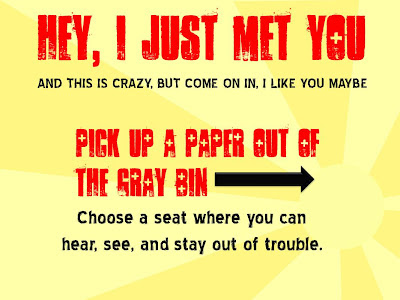 They grabbed the paper and I asked them to read it and ask about anything they didn't understand. Questions about the Jedi stuff were the most asked by far. And every single hour knew it was Star Wars at least so all is right with the world. We had enough time to talk about everything I wanted to in 8 minutes or less. Mission accomplished.

Thursday we had our full 47 minute class period. I started by having them decorate an index card with their name and birthday, which I hang on my door during the week of their birthday. From there, I passed out decks of cards to play Sarah 's 31derful game. (notebook file, ppt file). It went great. I had only one hour where no one solved the puzzle. There was so much conversation and frustration. I explained that I was setting up them up for what they should expect in my class: you're going to have think hard, communicate with others, listen to new ideas, not give up, and use the knowledge you already have to solve problems. I would say that overall they enjoyed it, other than the typical smart aleck boys who want to do nothing at all times.

Tomorrow is Friday and we will be writing Mathographies. I googled mathography prompt and found this link which I then modified to fit me. I also wrote my own mathography. (Here's the doc, but I took out my personal information since I'm posting it here. I did answer every question.) Partly to model what I was expecting and partly so they could see how I struggled with math and why I chose to teach it. I feel pretty proud of it, I guess because I was honest and a little vulnerable in it and I'm hoping to see that reflected in their writing. I hope that it will set the tone- how I want them to take this serious and not just slap something down to try and get it done. I know it will be a struggle considering how little effort they were willing to expend to write their name and birthday on an index card.

I plan on at least having them read this again at the end of the year and possibly answering the same questions again or modified questions.

Next week I plan to teach some specific skills: summarizing, compare/contrast, translating words into math, and analyzing errors.