My Copy Cat Made 4 Math

Every Saturday me and my mom go to yard sales. This week was kind of a bust and so we went to waste time at the Dollar Tree. Both me and my mom are total office/school supplies geeks (she is a secretary) and so we were very easily amused. 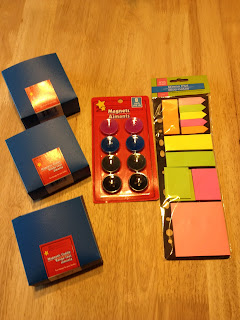 This is what I allowed myself to buy. =) Three magnetic blue caddies which I will hang on my whiteboards and either put markers, pens, or my SMART board remote inside of them.

Magnets. I don't really know why other than they are cute and $1.

And then this set of post-its, (the same one's druin bought for her teacher binder lol) because I prefer the mini ones but they are so ridiculously expensive. I never use those little flag sizes so let's brainstorm a way we can use them. I'm assuming they're made for books as little bookmarks. Is there another way to use them?

Then, ironically, I read druin's post about Target so I turned around and went there as well. She must have a super Target because mine sucks compared to hers. 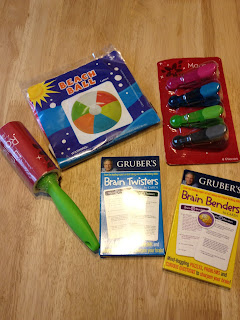 I was on a mission looking for things druin found and when that didn't work I had to look all over again and decide what could actually be useful. I bought the lint roller because that seemed to be the one thing students always asked me for that I didn't have. Plus it is lime green and matches my school stuff. So yay.

I bought the clothes-pin type magnets because I love them and every time I go to Target I buy at least one pack.

I bought the decks of cards called Brain Twisters and Brain Benders because I thought they would have some good questions to use for warm-ups. I'm thinking of making warm-ups a review of past courses so that everyone should be able to start and complete them as well as to build retention. More on that another time.

And lastly, I bought this beach ball because I want to try the idea of a toss 'n talk ball. I think it will be great when the class gets sleepy or lethargic to start tossing it around, even make a game out of it. The hard part will be figuring out what kind of questions or what to write on the ball itself. I guess we could do vocabulary words and just keep adding them on as the year goes by. What do you think I should write on it? 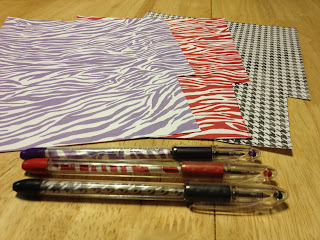 I decorated my pens with coordinating scrap book paper. I'm a freak about matching. This sucked. Thankfully druin told me to cut a strip 3.5 in x .75 in and that helped but scrapbook paper does not roll well. It was more like an ugly fold. And you can see the ugly creases but I couldn't get it to look any prettier. Oh well. If it bugs me I'll just take it out. 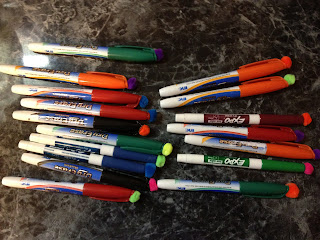 Then I hot glued pom poms on to the end of dry erase markers to use as an eraser. I glued them on the ends of the lids so that students will put the lid on the end of the marker. I think I need bigger pom poms but I was just using the ones I had without buying new ones. I also realized that when I replace the markers, I can just switch out the lids so that I don't have to glue new pom poms on. But realistically, the pom poms will probably wear out before the markers do.

And that brings us to the end of me talking about how awesome I am for copying other people's ideas!
Created by miss.calcul8 on Monday, July 09, 2012