Life of a Substitute Teacher

I just wanted to share some moments from my substitute and student teaching so I could look back and laugh at how crazy students are. Maybe you'll laugh too...

From a third grader: "You know, every day since I was born has been nothing but misery."

“Yeah. The only happy days are Christmas and my birthday.”

“Well, if you smiled more, I bet you would feel happier.”

“But I have a stupid smile. See?” He scrunches up his face and smiles to show every tooth. At this point, I can do nothing but laugh. And his final comment, “I have huge teeth!”


From Kindergarten - A little boy tells on another little boy for saying the s- word. I pull him aside and ask him (with my serious face) if he did say the word. He looks everywhere but me and finally makes eye contact to say, "Well yeah. But my bwother has three Nickelback cd's that say it..."


Another one from Kindergarten - The students are playing pass the beanbag, another version of the hot potato game. A cd plays a song and stops randomly to ask "Who has the beanbag?" The kids are passing it around furiously until one little boy - who doesn't quite understand the game - picks it up and throws it across the room. All the other kids stop singing and stare and he shouts, "Who has the beanbag now?"


One day in geometry class I was teaching with the overhead projector (which I happen to be obsessed with). A girl in the second row kept sliding the chair out from under the boy in the first row hoping he would fall. The boy kept pulling it back in place. He got up to go get a piece of paper and when he came back to sit down she slid the chair away again. As he began to fall he grabbed the edge of the desk and the edge of the projector cart. The cart is on wheels and did a 360° causing the boy to slowly twirl around in mid air until he hit the floor. Hard to explain but the glass giggled for the rest of the hour.


The numerous times I tripped over the overhead projector cord...


The time my university supervisor came to observe my teaching and one of the students raised his hand to ask me if he was my husband. He is in his late 50's and I am 22. Enough said.

It's recess for Kindergarten but they can't go outside because of bad weather. The littlest boy in the whole class is making the other boys play army and he is the commander. Some of the soldiers get distracted playing with cars and the little boy runs over to tell them, "Put those down. We're too big for that!" They're five!


The numerous people who get hit in the face with a dodgeball during high school gym class. Ouch, but wow. Hilarious. In addition to the ballerina moves, dives, rolls, flips, and back bends that the boys due to keep from getting out.


Two 17 year old boys who are best friends and chase each other around, fighting, poking, punching, and hugging like they're five.


The time two senior boys kissed each other on the lips because someone dared them a dollar to do it. Oh the joy that dollar brought.


The boy who runs around tapping people on their shoulder and moving to the other side, thinking they won't know it's him. They always know.

The smell of the bathroom. Each one is unmistakable.
The funny things high schoolers find. Like animal crackers that are very...close. 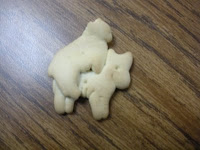 When the class I was supposed to be subbing for snuck the fire extinguisher out into the hallway and started spraying it. It's only funny because it wasn't me.

What's not funny: the hundreds of times I've had to hear how much me and my sisters look alike.
Created by miss.calcul8 on Tuesday, February 10, 2009