Keep in mind that we have already done systems by graphing and reviewed finding solutions of equations. I started class with this: 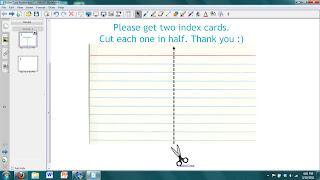 Next, I presented them with this slide and asked them how to solve: 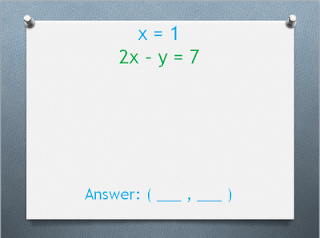 They easily knew what to do and how to write it as an ordered pair. Next I presented them with this slide: 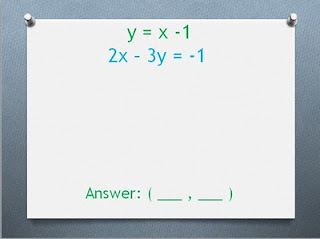 I think maybe one or two students kind of knew what to do but for the most part, they were stumped. Now that is where the index cards come in. So we took one half (I just had them cut them up so I wouldn't have to use as many) and on one side they wrote y. On the other side, they wrote x - 1 because that is what y equals. Next, I passed out legal size white paper. I had them write the second equation down. Instead of writing the y though, I told them to draw parentheses big enough that your index card would fit inside it. We practiced looking at the equation with the index card showing the y and then flipping it over to see the x - 1. I think this was a good 'kinesthetic' activity because we were literally replacing the variable in the equation with an expression. So now students knew we had to do distributive property and then combine like terms.
From there we did one or two more examples and then they figured it out with out having to use the index card.

The next day, we practiced again.

This time, I had students get a colored pencil to write the substituted parts to make them stand out better. So we started out with a system. I told the students to make a cloud around the equation where the variable is alone. In the example below, we clouded 5y - 1. I asked the students what that equaled and when they answered x, I showed them to then circle the x in the second equation. From there we plugged in (with the colored pencil) the cloud where the x had been. We went through the steps of solving and found that y = 2. Then, with colored pencil, make a cloud around that. Draw an arrow from one cloud to the other. I asked them what happens when two clouds hit? (You know where I'm going right?) Make it rain! Last year my students always forgot to find the second coordinate of the ordered pair but now I know they will always remember to make it rain (if nothing else!).
. 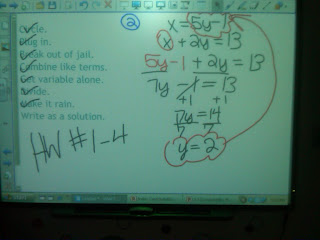 I found this joke worksheet last year and I really like it because students can self-check using the answers on the right. But beware, students can figure out the joke. Specifically tell them you will be checking their work, not just the answers.

I assigned #1-4 for homework at first because you don't have to solve for a variable to start out.
One student told me she cried because she couldn't figure it out. I think what frustrated them about this was that they knew what to do, they knew that they could do it, but they were just making mistakes. Some students have actually told me that they like this and one girl said it was the easiest thing we've done all year. I've tried to stress to them that this is a new concept but a familiar process. As they practice, they improve. But what I have been impressed by is that they don't give up. They know they can do it.
Right before lunch one girl said I was making her hungry with all of this thinking and hard work. Success!
Those of you that have been reading and responding to my tweets have probably noticed my moody-bitter-I-hate-everybody-what-is-the-point-of-teaching diatribe. I still feel that way. I feel like even though my students are learning at this point, they won't know in two weeks how to do it. Or two months. And definitely not in two years. We have data to back that up.
I feel like my job is pointless. They aren't retaining anything and I don't know how to make them retain it. We've identified that students aren't really doing any critical thinking but I don't know how to fix that. Or teach it better. Or make it stick.
So. I will keep going on but yesterday, I wanted to quit. This job is impossible. If the people before me couldn't do it, what makes me think I can? I think a mark of a good teacher is when you can make the lower level students learn. I'm not doing that. Anyone can teach the top students. How do you reach the rest?
Even then, our smart kids are not retaining anything.
What. Is. The. Point.
?
Created by miss.calcul8 on Thursday, March 10, 2011