I do these more for myself than anyone else, but here, I am quoting the most useful parts of this ASCD book (click links to read online for free). Basically, I'm editing out the boring. You're welcome.

I'm also just doing a couple of chapters at a time because it's kind of dry and I never know how much time I will have to read. So consider it a series if you like.


Literacy Strategies for Improving Mathematics Instruction
Joan M. Kenney
Chapter 1: Mathematics as Language
*An ESL student thought of 'whole' numbers as 'hole' numbers, as in how many holes a number add. He thought 6 and 10 were odd numbers because they each only have one hole. He didn't know if 3 was even or odd because it could be considered as having two holes or two half holes which would make one whole hole. He knew the definition of even or odd but misunderstood 'whole'.
Younger students can be quit mystified by the fact that changing the orientation of a symbol- for example, an equal sign (=) from horizontal to vertical- can completely change its meaning.
Vocabulary can be confusing because the words mean different things in mathematics and nonmathematics contexts, because two diferent words sound the same, or because more than one word is used to describe the same concept.
Symbols may be confusing either because they look alike (e.g., the division ad square root symbols) or because different representations may be used to describe the same process.
Graphic representations may be confusing because of formatting variations or because the graphics are not consistently read in the same decision. 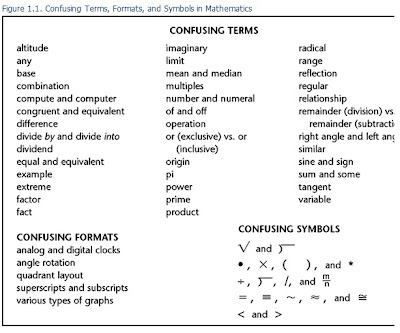 Chapter 2: Reading in the Mathematics Classroom
One strategy we arrived at is for teachers to model their thinking out loud as they read and figure out what a problem is asking them to do. Other strategies include dialoguing with students about any difficulties they may have in understanding a problem and asking different students to share their understanding.
James Bullock (1994) defines mathematics as a form of language invented by humans to discuss abstract concepts of numbers and space.
The meaning that readers draw will depend largely on their prior knowledge of the information and on the kinds of thinking they do after they read the text (Draper, 2002): Can they synthesize the information? Can they decide what information is important? Can they draw inferences from what they've read?
In English there are many small words, such as pronouns, prepositions, and conjunctions, that make a big difference in student understanding of mathematics problems. For example:
In her book Yellow Brick Roads (2003), Janet Allen suggests that teachers need to ask themselves the following critical questions about a text:
If we are really trying to help students read and understand for themselves, we must ask them questions instead of explicitly telling them what the text means: “What information do you have that might help you answer this question?” “Does the fact that this is a ‘follow-up’ help us to decipher the question?”

As the reading progresses, the teacher should ask process questions that she wants the students to ask themselves in the future. They may be asked to predict what the reading will be about simply by reading the title of the piece (if there is one, such as a graph or story problem). Next the students should make two columns on a piece of paper, one headed “What I Predict” and the other headed “What I Know.” Once the students have silently read each section of the piece, they should fill out each column accordingly. At this point, the teacher should ask students questions such as the following:
Figure 2.4 shows a simple example of a possible guided reading for a lesson from an algebra text. The text would be unveiled one paragraph (or equation) at a time rather than given to the students as one continuous passage.

Students are helped not by having their reading and interpreting done for them, but rather by being asked questions when they don't understand the text. The goal is for students to internalize these questions and use them on their own.