I've had a lot of problems with students constantly talking in my Geometry class. I have 25 students and it's just not a good combination. I've tried lecturing and guilt tripping them about respect. I've tried holding them late after class. My most recent strategy was to add a homework problem every time they get loud. For example, if I wanted them to do 8 problems, I'd make a worksheet of 16 and write an 8 on the board. If they get loud, I walk over to the board, cross out the 8, and write a 9. I like it because it's nonverbal and doesn't interrupt the class. Also, they can't argue with it. If I start walking near the board, they try to quiet everyone down. It's helped some but it hasn't changed the fact that they don't respect me and ignore what I say.

So I decided to experiment. I've wanted to do this since my first year of teaching but was never sure I could pull it off. I did not talk. I went through the entire class without speaking. It was so fun!

I stood at the door and talked to students as they came in. When class started, I started the timer for 4 minutes to signal students to work on the bell ringer. When students called me over to ask questions, I spoke to them individually. From then on, I didn't speak. When the timer went off, I worked out the problems on the board so students could check their work. Normally I would explain the problem and call on students to tell me what to write. This time I wrote in silence and they magically did the same.

Our lesson was on the midpoint formula. I had a worksheet and corresponding PowerPoint but in a tragic turn of events, the worksheet pictures were different from the PowerPoint. Oh no! So instead of the worksheet, I held up a blank piece of paper. They got the hint and got out paper. I showed a horizontal line on the coordinate plane and the PowerPoint asked, How could we find the midpoint? A couple students figured out that we could just count the squares and then take half of that. The next picture showed a slanted line so that their method no longer worked. I pointed at the endpoints of the line and they gave me the coordinates.  Then I showed them the formula and they told me what to write. We went through several problems that way. I pointed to students when they needed to write. When they asked questions, I redirected it back to the class and other students explained. I walked around to monitor their progress.

I was amazed at my own ability to communicate without speaking.

Some students were really angry at me. Which I still haven't figured out. Some were very helpful interpreters. There were two students who I don't think have truly understood anything we've done all year that were completely engaged, did their homework, and actually enjoyed class.

I asked them three questions at the end of class as an exit slip.

The response to number 2 were incredibly valuable. Here are some of their comments: 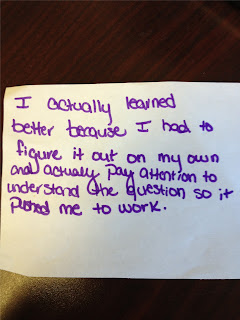 The next day I showed them the results and put up the following quote:

"If students could learn math by just listening, teachers would have been replaced by tape recorders a long time ago."

I asked them what this meant. They commented that you need to do more than hear it, you need to see it and actually do it.

Then I asked them how I could talk less so that they could learn more. Some of their suggestions were that I talk 2 days a week and not talk 3 days a week, not talk until they asked me a question, and only talk 5 times a period.

I haven't really decided what I'm going to do but I have been really noticing how much unnecessary talking I do and I hope I'm doing a good job of cutting it out.

My biggest takeaway from this experiment is that my students do not listen to what I say. As soon as I start talking, they tune out. They know I will repeat it or that it does not matter. This is a part of my issue with respect but I haven't  figured out how to master that yet.

I forced myself to communicate only what matters.

I think I made them think.