I've been trying to come up with more ideas where students solve problems with more than one step as well as a way for them to self-check and kind of monitor their own progress.

First of all, index cards are a teacher's best friend.

Second of all, I'm finishing up (*fingers crossed*) my linear equations unit and I used basically the same idea to practice two different concepts.

My first idea was to make two sets of cards, one with point-slope form equations and the other set with the same equations but in slope-intercept form. 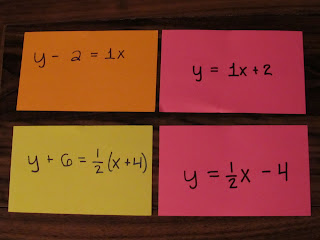 The bad part of this idea was...I never actually did it. But aren't my cards pretty? =)

Idea number two was much better and actually implemented.

I took one set of cards and wrote two ordered pairs on the front. 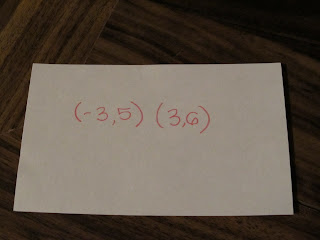 Students were in partners. The first partner uses the slope formula and finds the slope between the two points. I wrote the answer on the back so tiny that they wouldn't see it through the card. The second partner flips the card over to make sure they have the correct slope. 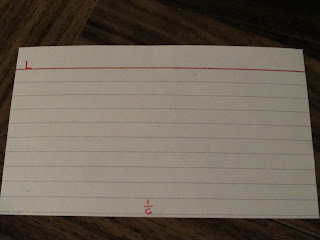 If not, they go back and look for the mistake. If they are correct, the second partner now takes one of the points and the slope and writes the equation in point-slope form. Then, they solve the equation for slope-intercept form.

I had all the cards (there were more than this) laid out and the pair had to come up and find their equation. 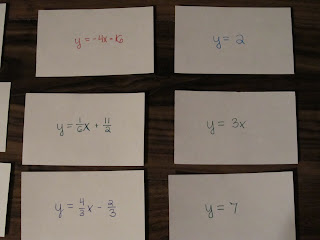 If they couldn't find it, then they knew their equation was wrong (since they had already checked the slope).  And, from looking at the equations and their slope, they could usually pick out what their equation should be and that helped them to find their mistake.

Once students thought they had the matching pair, they flipped both cards over. In the top left hand corner I had written a tiny capital letter on each set. If the cards matched, students knew they were correct. 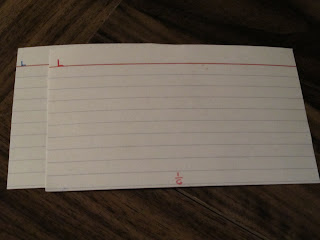 I gave them a new card of ordered pairs and the partners repeated the process, switching roles each time.

I hope this doesn't sound too complicated. It was somewhat confusing at first but after the first set of cards, students knew what to do. Of course, I was there to help them correct mistakes but my biggest job was to make sure students weren't just finding the letter and then searching for the right card. I kind of played gateway to the cards and made them tell me their equation or show me their work before getting to choose a card.  Like any other activity, teachers need to circulate the room, check and correct.

If this doesn't work for you, I hope it triggered some other idea of how to use index cards, get students up and moving around, or just to break up the monotony of your routines.