How I Teach New Concepts: A Prequel

Thanks to some comments on my post about how I like to teach, I decided to expound.

My new love is concept attainment.

I'll use my parallelogram unit as an example since I referenced it in the post above.

I started out with a Powerpoint slide in two columns. 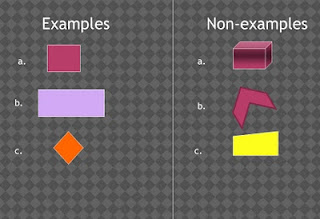 The left column contains examples, the right column contains non-examples. As I clicked through, a shape appeared in each column. Students had to compare/contrast the two figures and decide what the example had that the non-example did not. After each pair, I instructed the students to modify or add to their guess so that it would apply to every pair.

By the end, they should have around 4 different properties of parallelograms without me ever saying a word. Well, maybe some leading questions. But we never mention the word parallelogram.

Then using rulers and protractors, we dove in to this investigation. Students measured pieces of parallelograms to find properties of a parallelogram, some of which are the same as what they deduced from the Powerpoint slides.

By the end of the period, students collaborated in teams to write a pretty well all-encompassing definition of a parallelogram. The 'actual learning' is that they've brainstormed, compared/contrasted, modified, and deduced these things all on their own. They've discovered the hidden secrets of the parallelogram! And they're much more likely to remember what they've found on their own as opposed to what they read or heard me say.

For those of you that are curious, the next day we did a parallelogram sort. Students measured pieces of other quadrilaterals to decide what properties apply to all, some, or none. Once they cut out and sorted the properties into four piles, they converted that information into this nifty checklist.

Finally from there, I threw the handout of problems referenced in my post. Using only the properties they discovered, they began to solve problems. We had not solved any problems at all. So in my mind, this was a "problem of a type learners had never seen, and related to a concept that had never been taught". I guess what I should have mentioned is that we did lay a foundation of properties before throwing those problems to students. But, in no teaching strategy that I know of, do we ever toss brand new information out to students without a lifeline.

We want to provide opportunities that are challenging but doable.Say it with me: scaffolding. I believe this strategy achieved that for me. I made sure my students could swim and and had their life preserver, then I threw them overboard.

I have some life preservers to fetch.
Created by miss.calcul8 on Tuesday, January 18, 2011