A Nod to Dan Meyer


I detest teaching the intro stuff in geometry....segments, lines, planes, angle addition, midpoint formula...it just seems so boring and obvious that I can't stir up much joy in teaching it.

My fourth year of teaching and I've done it all four different ways. Here is what I've done this year for midpoint formula.

Back in August, I loved the post Dan Meyer wrote "How Technology Can Help" where he mentioned having students guess the lengths of sides of triangles before calculating them with trig ratios. I've been itching to use this idea and it dawned on me that this would be a perfect way to introduce the midpoint formula. 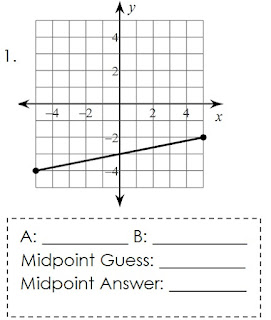 As I walked around I heard some good questions: "Does it matter which point we write down first?"(Umm no since I forgot to label them A or B in the first place! lol), "What do we do if it's not exactly on a square? Can we just make up a number?" Students seemed to feel as if they were breaking the rules by making a guess. I've realized we never give them permission to not know the answer. Or as Dan would put it, we abstract it away.

Next we went through each problem and I would ask them to share their guess before revealing the true answer. There were a lot of right and wrong answers but I felt that students really were more engaged by the way they were shouting out the answers and leaning forward in their seat or by the way they shouted Yes!!! when their guess was correct. I guess that deep down inside, we all want to know that we have what it takes to be a guesser- or rather to be able to figure things out on our own.

From there we went to a table of points where the midpoint was given. I wanted students to develop a pattern rather than a formula. They quickly realized that the midpoint coordinates were 'in between' the coordinates of the endpoints. But as numbers got farther apart, for example 10 and -5, it wasn't quite as easy to see. It didn't take long for them to figure out what to do actually, although I definitely have some stragglers who really miss out on anything that happens through discussion rather than explicit written examples.

I used the last two empty boxes as an opportunity for students who 'got' the pattern to do on their own and then I worked it out so those who were not getting it could see the actual work.

We concluded the lesson by writing, in words, how to find the midpoint. I was really proud of us for not needing a formula. Actually, I don't think I am going to mention the formula yet. I may have to mention it when we work backwards to find the other endpoint, but I will ponder that and see if I can avoid it.

Tomorrow we will be doing the last three examples in class and then students will split into partners and do this row game. One partner will work algebraically and one will work graphically so that both partners end up with the same answer. Shoutout to @druinok for the idea. When they do the back, the two partners will switch roles. I've decided that since I've labeled the columns A and B, I will have students fold their paper hot dog style so they are truly focusing on their column only. 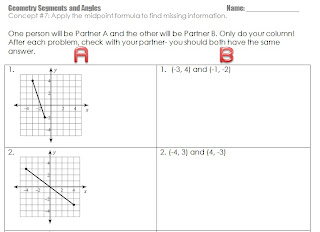 At the end I will give the answers and debrief- hopefully there will be some interesting conversation. If not, well at least I accomplished my mantra of "be less talkative" or as I like to call it....BLT!