We are in the middle of our polynomial unit and I decided now would be an appropriate time to teach exponent rules. I had prepared a concept attainment for the exponent rules before I talked to my coach. She suggested that we stray away from teaching 'rules' and rather teach the concept behind it. So basically, I only taught the concept of multiplying the coefficients and adding the exponents. When it came to the power to a power rule, we literally expanded it out and then multiplied coefficients and added the exponent. The more that we practiced the concept and writing them out, the more students figured out the shortcut of taking the coefficient to the power and then just multiplying the exponents.

I was skeptical of this method at first until I realized that it was a better way to scaffold the lesson. Present one concept at a time, that will build on prior knowledge. Practice it until it becomes second nature and they will naturally look for a shortcut. We humans are mighty efficient like that.

I taught one concept but we were really practicing three rules:  power to a power, product to a power, and the distributive property. My coach is a big fan of sorting. I made a set of 18 cards, 3 groups of 6 that represented each rule.


These are index cards (my favorite!) cut in half by the way. So each group had the same cards and they were all mixed up of course. The students were instructed to spread them all out and then begin sorting into piles. 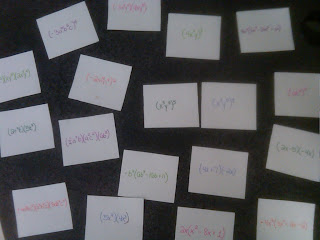 I did not give any parameters to sort by. In every class, without fail, my top students' team quickly sorted them by color. I then charged them with the question, "If I am asking you to sort them, do you think I would have color coded them for you?"

If teams were really struggling, I told them they should have 3 piles. A lot of teams sorted them by sets of parentheses which works for the power to a power group but not the other two. Every single group mistook two of the distributive property cards because they were written backwards compared to every other one in the group. 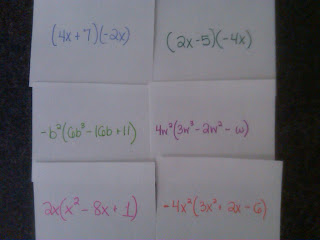 See above. (4x + 7)(-2x) and (2x - 5)(-4x) look different and so students put them into the product to a power group. I guided them to look inside the parentheses and see what's happening. From there they realize the distributive property means there will be addition and subtraction.

Once students had them correctly sorted, they distributed the cards evenly among themselves (some from each group) and then solved them. Depending on quickly the group got done, students could rotate cards and work more problems.

Each card had a letter on the back. Students wrote the letter next to their solution so that we could check the answers. 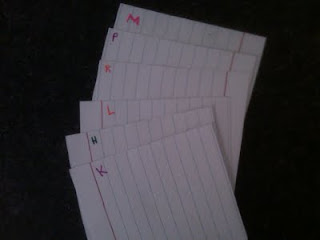 Students tried to sort by alphabetical order but that only created one big group. :) They also tried to sort by what 'looked' easy, medium, hard or problems that looked short, medium, or long. Also some tried to  group based on how many negatives or positives in the problem and even how many exponents existed. My whole goal was for them to know when to use each rule/shortcut/property. By asking students to sort, we are kicking it up a notch higher in Bloom's Taxonomy or DoK and hopefully making them think. The more I am less helpful, the more opportunity for students to construct their own meaning.
Created by miss.calcul8 on Friday, April 22, 2011